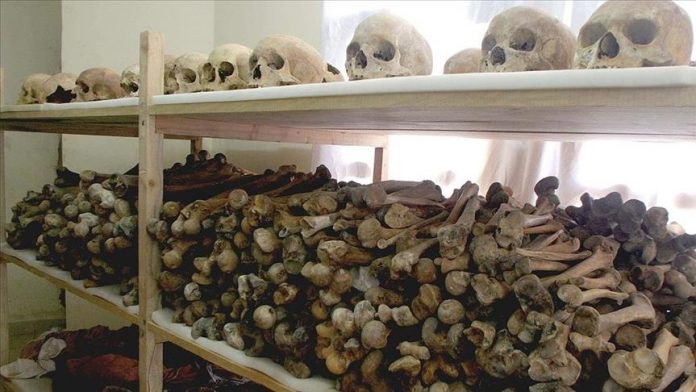 New documentary evidence from official French archives revealed that during the 1994 genocide in Rwanda, Paris allowed the perpetrators to flee while ignoring a request by its own ambassador to arrest them.

French online outlet Mediapart published a diplomatic telegram dated July 1994 in the midst of the genocide, accessed by Francois Graner, the research director of the French National Research Center (CNRS), who has been studying official archives related to France’s role in the genocide.

In the genocide, at least 800,000 people mainly from the Tutsi minority were massacred in a span of about 100 days. Thousands of women from the tribe were raped and villages torched and pillaged.

The French army, deployed under the UN peacekeeping mission, established a safe humanitarian zone in Rwanda and the neighboring Democratic Republic of Congo. However, the real intention behind Paris’ humanitarian intervention has been questioned since 1994, with some saying the safe corridor controlled by the French army was a cover to shield the forces behind the planned killing.

According to Mediapart, French diplomat Yannick Gerard, in a telegram on July 15, 1994 from Rwanda, sought instructions from Paris on “personalities almost all of which are considered responsible for the massacres” who had arrived in a refugee camp run by the French military in Gisenyi, on the border with Zaire.

The cable said: “We have publicly informed them their presence in the area was not desired” and “they would be put under house arrest until their surrender to the United Nations.”

In response, Bernard Emie, then-advisor to Foreign Minister Alain Juppe and the current director of the General Directorate for External Security (DGSE), wrote:

“You can use all indirect channels, and especially your African contacts, to convey to these officials (under the control of the French army) that we ask them to leave the Safe Humanitarian Aid Zone, without directly disclosing yourself. The international community, and in particular the United Nations, will follow against these so-called authorities. Underline that you can determine the path very soon.”

Gerard followed the instructions allowing the people to escape. He opened the closed borders and sent them to the border with vehicles.

Graner told Anadolu Agency that these people were in fact 14 members of the government that committed the genocide, including the prime minister and many government ministers.

Although France’s complicity in providing material support in the genocide has come to light through survivors’ testimony and archival documents, Graner said it was not known that the government gave a specific order allowing the perpetrators to escape.

“This document shows how France took this decision and wanted it done secretly. It came from the Foreign Ministry headed by Juppe,” he said.

The decision was taken even before the UN Security Council in New York could decide whether the perpetrators should be arrested.

Graner added that France was the only country that accepted the representatives of the government whose establishment it supported. “During the genocide, in April 1994, two representatives were hosted in the Prime Ministry, the Foreign Ministry, and the Elysee Palace,” he said, referring lastly to the presidential residence.

“This is political evidence of France’s continued support for an extremist Hutu group before, during, and after the genocide. France relied on them to keep the region under its influence.”

Graner stressed the grave consequences of France’s support for the genocide against the ethnic Tutsis.

Allegations on France’s dubious role and involvement in Rwanda have been a source of tensions between the two countries. In 2016, Rwanda implicated 22 French military officers for their direct role in the genocide.

While Paris has denied claims that it supported the Hutu regime’s efforts to exterminate the Tutsi, it has provided refuge to several figures suspected of planning and carrying out the genocide.

Agathe Kanziga, the widow of assassinated President Juvenal Habyarimana, and alleged powerful figure of the inner Hutu circle responsible for planning the violence, has been living in France. In 2011, France refused an extradition request.

Last year, Felicien Kabuga, known as the financier of the genocide, was arrested after he was found to be hiding in France for 26 years.

According to information collected by the Collective of Civil Parties for Rwanda NGO, there are around 30 cases of people allegedly responsible for the genocide presumed to be living as refugees in France.

During a 2010 trip, the first by a French head of the state since the genocide, then-President Nicholas Sarkozy famously admitted that his country had made “grave errors of judgment” in 1994.

In a bid to reconcile Franco-Rwandan relations, in 2019 President Emmanuel Macron appointed a panel of historians and researchers to investigate France’s role in the Rwanda genocide. The findings of the report are due this year.