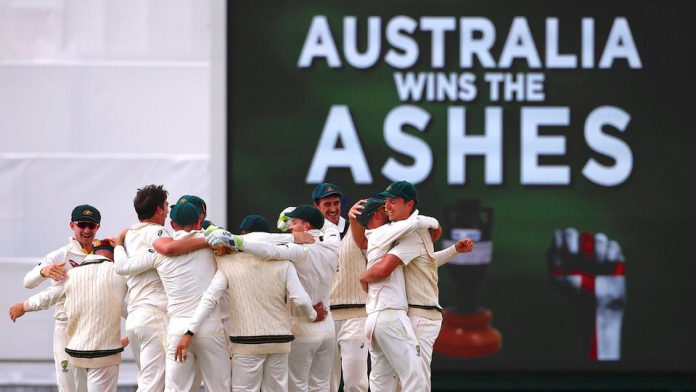 Australia beats England by an innings and 41 runs in the third test in Perth on Monday. For the third time in four series ‘down under’ the Australians polished off England at the earliest opportunity.

Australia thrashed England by an innings and 41 runs in the third test in Perth on Monday to reclaim the Ashes with two matches to spare and condemn Joe Root’s team to a period of gloomy introspection.

Seamer Josh Hazlewood finished with a five-wicket haul as England were bowled out for 218 before tea at the WACA, four years after Alastair Cook’s side meekly handed back the urn at the same venue, and with the same humiliating 3-0 scoreline.

Play was delayed by three hours by damp patches on the pitch and rain squalls throughout the morning, but it was not enough to save England as they lost their last six wickets for 85 runs.

“What an amazing feeling to win an Ashes series, my first as captain to be three-nil up… it’s quite incredible.”

Even with some 28 overs lost to the weather, England resumed in peril at 132 for four, still 127 runs short of making Australia bat again on a pitch riddled with cracks at both ends.

Wicketkeeper Jonny Bairstow was bowled for 14 by Hazlewood on the first delivery he faced, with Nathan Lyon trapping Moeen Ali lbw for 11.

First innings centurion Dawid Malan raised his fourth test half-century but after being worked over by Hazlewood, a gloved catch behind for 54 when trying to pull the bowler.

Hazlewood claimed his fifth victim of the match when tail-ender Craig Overton was taken in the gully for 12 where Usman Khawaja took a fine low catch.

Stuart Broad lasted two balls before he was caught behind off Pat Cummins, with the same bowler wrapping up the match and the series by dismissing Chris Woakes for 22.