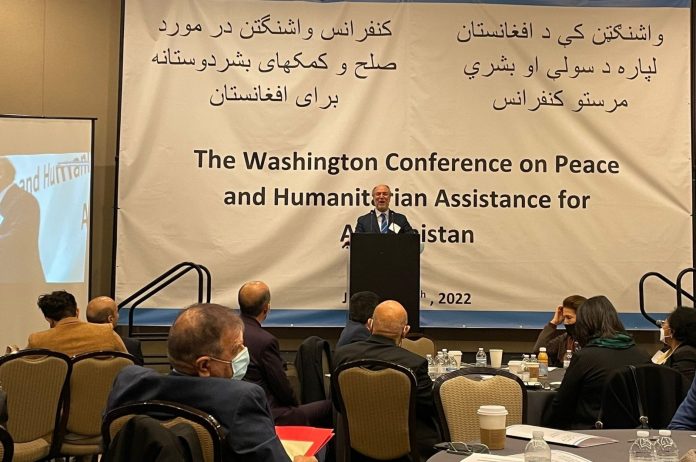 Afghans in the United States have demanded that the Biden administration lift the restrictions on Afghanistan’s banking sector and release its citizens’ financial assets.

The humanitarian situation is worsening in Afghanistan after the U.S. withdrew its troops from the conflict-hit country and the Taliban took control of the government by seizing Kabul on Aug. 15.

The U.S. froze $9 billion in financial assets belonging to the Afghan central bank after the Taliban takeover and said assets the government has in the U.S. will not be available to the Taliban.

“Now, Afghanistan is in dire need. I hope they (Biden administration) release the assets of Afghanistan,” said Bakhtar Aminzai, a former member of the upper house in Afghanistan’s parliament.

Aminzai made the remarks Monday to Anadolu Agency (AA) on the sidelines of a one-day humanitarian conference for Afghanistan in Washington, D.C.

He said the freezing of the assets directly affects “innocent Afghan people” who he said are suffering amid the worsening situation in the country.

“I think America, American people and government will soon release the assets of Afghans and encourage charity organizations for helping Afghanistan,” added Aminzai.

ACBAR is an organizer of the conference along with the Zakat Foundation of America – a Chicago-based nongovernmental organization (NGO) that helps those in need in Africa, Asia and the Middle East.

He also cited U.N. reports that said around 1 million children in Afghanistan could die from hunger.

“There is a crisis ongoing and this is all because of the sudden collapse of the government and failure of our leaders in the past as well as the international community,” said Misbah.

He said the U.S. put restrictions on the banking system and no aid organizations are allowed to send money to Afghanistan for humanitarian assistance.

“The U.S. is silent and we want them at least to solve the problem of sending money for humanitarian purposes,” he said.

Mishab also urged the U.S. and Taliban to resolve the conflict in Afghanistan as soon as possible, saying time is running out and the situation is becoming more urgent.

Halil Demir, the executive director of the Zakat Foundation, told AA that the world wants to help Afghanistan but the financial paths to do so are closed, adding that the U.S. refusal to recognize the Taliban government prevents humanitarian aid from reaching Afghanistan.

“The banks are not ready for the help we want to give. This is the biggest problem right now. The lack of financial access to (banking) services is the problem of all of us,” said Demir.

The U.S. announced Tuesday more than $308 million in humanitarian assistance for the people of Afghanistan.

Afghanistan’s plight is one of the world’s most rapidly growing humanitarian crises, according to U.N. aid agencies.

The U.N. and its partners launched a more than $5 billion funding appeal on Tuesday for Afghanistan.