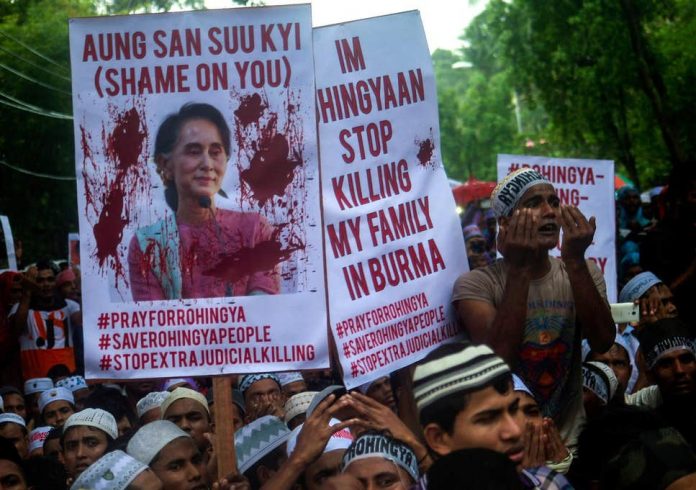 The rare action against military members came as Myanmar faces charges of genocide at the United Nations’ top court over a brutal 2017 crackdown against the Rohingya.

Some 750,000 Rohingya fled to neighboring Bangladesh with accounts of widespread murder, rape and arson.

After initially denying the allegations, the military started court-martial proceedings in September, admitting there had been “weakness in following instructions” in the village.

The commander-in-chief’s office announced Tuesday the court-martial had “confirmed the guilty verdict” and sentenced three officers.

No details were provided on the perpetrators, their crimes, or sentences.

Estimates from survivors in Bangladesh put the death toll from the village in the hundreds.

The government has largely supported the army’s justification of the 2017 operations as a means of rooting out insurgents.

Civilian leader Aung San Suu Kyi admitted at the International Court of Justice in December, however, that disproportionate force may have been used.

The military has maintained any atrocities were committed by a few maverick individuals.

The army chief’s office said Tuesday a court of inquiry would “continue to investigate” events at both villages.

In 2018 the military sentenced members of the security forces to a decade in prison for the killing of 10 Rohingya in Inn Din village, but they were released after serving less than a year.

Two journalists who exposed that massacre were detained for more than 16 months before they were pardoned following a global outcry.

The state remains a flashpoint of ethnic and religious tensions and the military has been locked in battle since January last year with insurgents fighting for more autonomy for Rakhine Buddhists.

Intensified fighting over the weekend drew alarm from the U.N. on Sunday, who called for both sides to respect international humanitarian law as thousands of more civilians fled their homes from artillery shelling.

According to the U.N. figures, the Rohingya are the most persecuted minority in the world. The Myanmar government claims that Rohingya people are Bengalis and should go to Bangladesh, ignoring the fact that Rohingyas were living in the Rakhine state for centuries. The country of Burma, renamed Myanmar in 1989, has refused to grant citizenship to Rohingyas ever since, issuing temporary identity cards known as “white cards” to these internally displaced persons (IDPs).

Amid increasing pressure from Buddhist extremists, the government canceled the Rohingyas’ right to vote, previously granted in 2015, immediately before a constitutional referendum was held. Furthermore, the government interferes in every aspect of their daily lives, barring everything from the establishment of businesses to obtaining work and even marriage. Ongoing violence and discriminatory state policies have compelled the Rohingya to flee.